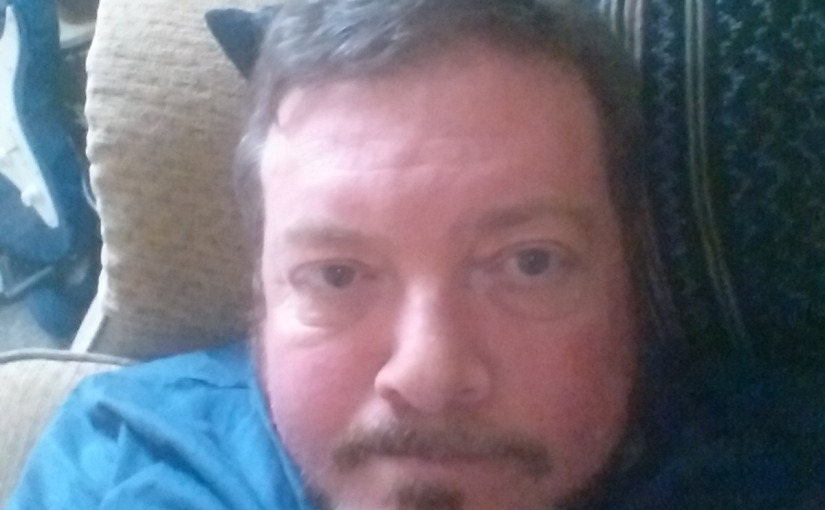 Here’s my thought for the day. Being disabled, sick and vulnerable in Britain today is not just scary but petrifying. My disability and illness are by no way extreme when compared to those having to be lived with by many I know or know of. I still have some days, though quite rare, where I can almost live as I used to. Where I can get out, ride a bike, even very rarely camp. These days are few and far between and usually come with a physical, mental and yes an emotional cost but I would never give those opportunities up.
For many they do not even get the odd respite, and for some each day is an actual fight for life. Most of the time we exist rather than live. We draw breath, eat (some of us), sleep (some of us), lay in bed or on the sofa and depend upon the kindness and friendship of others to communicate and feel part of the outside world. That is existing. For some its far worse.
Now disability provision is signposted with a sign depiction a wheelchair. What I have learned the hard way is not all disabilities are that visible. I spoke to a man yesterday that seemed no different to anyone else, yet he is in the ongoing stages of a terminal cancer. You would not know that. I sadly have several friends with that form of illness. Some are survivors, some will survive and devastatingly some will not. All are fighters beyond anything those without that horror will ever imagine.
My illness’ restrict me and my decisions, they have stolen my career and my self respect. They have robbed me of my virility and self image. They have taken from me a lot of what I see as my essence of being not just a human but a man. I appear on here as opinionated, confident and I hope intelligent at times, however my memory is shot, I forget I am cooking or have taken my meds, I forget to fill in forms and although can speak up on others behalf cannot on my own. Today I cannot even lift a coffee cup without it shaking as if there is an earth quake. Today my pain levels are high which likely means hitting my strongest meds. Not an easy thing to choose to do.
I can never plan in advance which has cost me massively, from credibility to long term friendships. If I say I will do something, even a phone call I often don’t, not through choice but because I truly cannot either for physical, mental, exhaustion or because emotionally I cannot speak to anyone.
As I say my life is no where near as difficult and painful as those of others.
So anyway why this rant? Well each day we are informed of more cuts to services, to the NHS and to the (hate this term) ‘benefits’ that we need to survive upon. There is no ‘benefit’ to being ill. The money people claim is what we all deserve. I worked until three years ago, I paid into a system designed to be a safety net for those in need. I never imagined I would need to make a claim but paid National Insurance and tax every minute I worked. Lets just consider that term, National Insurance. It is an Insurance policy we all have to take out once we earn. A policy that always should pay out when its needed. You cannot run a policy then just change the rules once its required can you? Well Mrs May seems to think you can. She and her cabinet of fraudsters, corrupt politicians of the worst kind are waging a war, no that’s wrong, a genocide upon the weak, sick and disabled. She and her party are literally killing off thousands of our friends and family on a daily basis. People who deserve the support of the nation are being vilified and made out to be draining the public funds (those same funds I spent over thirty years paying into). The reality however is the only people stripping the UK of assets, commodities, that’s money and property, are the rich. This fake need for austerity was fabricated after we had to ‘bail out’ corrupt bankers, when their fraudulent dealings went awry. That was an opportunity for the rich to use that ‘bail out’ to create a fabrication and lie which they use now to steal what is the nations, ours, from us.
People as I said are dying daily. We know this but the majority choose to ignore it. It’s some perverse ‘I’m alright Jack’ attitude. Well think about it folks, when did this eradication of the weak lead last time? Germany 1936?
We are supposed to learn from history but clearly we do not.
So why are we the sick, the disabled, the vulnerable – and actually I used the term the ‘weak’ but the reality is that none of us are weak, each breath we draw proves that, so fearful? Because to many of you now we are valueless. We are a monetary statistic to be ignored and wiped from existence. You may keep a door open at the sight of a stick, crutches or wheelchair, you may think kindly of your ill cousin, maybe even occasionally take your poorly neighbour a bowl of soup, but you have allowed us to become the victims of the state. Disabled were always fighters not victims, but you all continue by inaction to ensure this government makes us so.
What next is your choice, you are the people, and even an individual voice or action may be the catalyst for something much bigger. Its up to you.
Jonesy.